From London with Love 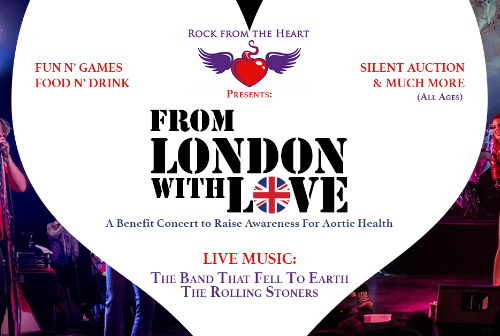 Join us on September 21st for From London with Love as we celebrate the music of David Bowie and the Rolling Stones and Rock from the Heart to raise awareness for aortic disease.

A fixture in the Minneapolis music scene for over 6 years, The Rolling Stoners deliver straight-up rock n’ roll the way our forefathers intended. Perhaps most famous for breaking the usual tribute band mold of style over substance, as The Stoners are not a tribute band per se, but a collective of dearest pals that admire the early era stones live performances and dislike special costumes.

The Band that Fell to Earth

‘The Band That Fell to Earth’ is a 6-piece Minneapolis based David Bowie Tribute Show featuring Ms. Bailey Ann as David Bowie.

Bailey and the band will have you singing, dancing, laughing, maybe even floating in space! With 2 guitars, keyboards, bass, drums, and 5 ½ voices, from Space Oddity, Suffragette City and Heroes, to Ziggy Stardust, Moonage Daydream and Lazarus – Rise Up and Celebrate the Beauty & Power, the Mystery & Majesty, the Rock & the Roll, of the Music of David Bowie.

About Rock from the Heart

Rock from the Heart (RFTH) formed after its founder survived aortic aneurysm and aortic valve replacement surgery. The organization supports heart disease education and awareness programs with a primary focus on aortic health. Aortic disease is often known as a “silent killer” and most thoracic aortic aneurysms are discovered incidentally when the patient is being treated for another condition. Aortic valve disease, aortic aneurysms and aortic dissections are potentially life-threatening conditions if not diagnosed in time. Frequently, these conditions are wrongly described as “undetectable” – but in many cases they are detectable. Risk factors can be managed. And with greater awareness and education of doctors, emergency medical technicians, emergency room workers, and patients, lives can be saved.

Thoracic aortic aneurysms are rare, occurring in approximately 6-10 per every 100,000 people. About 20% of those cases are linked to family history. Because the disease is rare, there is limited information available to those at risk and to those diagnosed with the condition. RFTH aims to change that by holding events that bring the condition into the forefront, committed to increasing public awareness of the factors that put people at risk for thoracic aortic disease, and to improving the diagnosis and management of these life-threatening conditions.

RFTH will also support programs and organizations working to bring high quality cardiovascular care to rural communities and smaller hospitals. RFTH will focus on developing resources designed to improve the diagnosis, treatment and management of aortic disease by advocating for early detection, meaningful support, and timely access to appropriate treatment for all people affected.

This event has ended